Adolescents and young adults (AYAs) with cancer face frightening and often debilitating effects of their cancer.  To support the care of AYAs, healthcare providers need to understand their distinct experiences, including their priority symptoms — those that take the forefront of a patient’s concern. This project involved a secondary analysis of AYAs’ responses to three questions related to their priority symptoms using quantitative text analysis.  These questions were: 1) What makes this a priority symptom?, 2) What do you think causes it?, and 3) What do you do to make it better?
Methods: Data were derived from a larger study in which 86 AYAs (15-29 years of age; median 19 years) receiving chemotherapy identified 169 priority symptoms prior to two cycles of chemotherapy using a heuristics-based symptom reporting tool.  AYAs’ responses to each question were analyzed using KH Coder (a text mining software).  Analyses included generation of word frequency charts, co-occurrence networks, and hierarchical clusters.
Results: The most common responses to, “What makes this a priority symptom?,” centered around the words “make” and “feel”, “need” and “energy”, and “do” and “not.”  Responses were organized into sixteen co-occurrence networks, suggesting distinct personal reasons for identifying priority symptoms.  Responses to “What do you think causes it?,” were organized into eight co-occurrence networks that were connected to “chemo.”  Responses to “What do you do to make it better?,” emphasized the words “take” and “medicine,” “try” and “eat,” and “sometimes,” “not,” “work.”  These were organized into eleven co-occurrence networks that illustrated patients’  tactics for alleviating their symptoms.
Implications: Our quantitative findings complemented those from previous qualitative analyses and extended this research by quantifying keywords and providing visual connections between these keywords.  Collectively, these data contribute to a better understanding of how AYAs cope with their symptoms, and how to better address priority symptoms among AYAs with cancer. 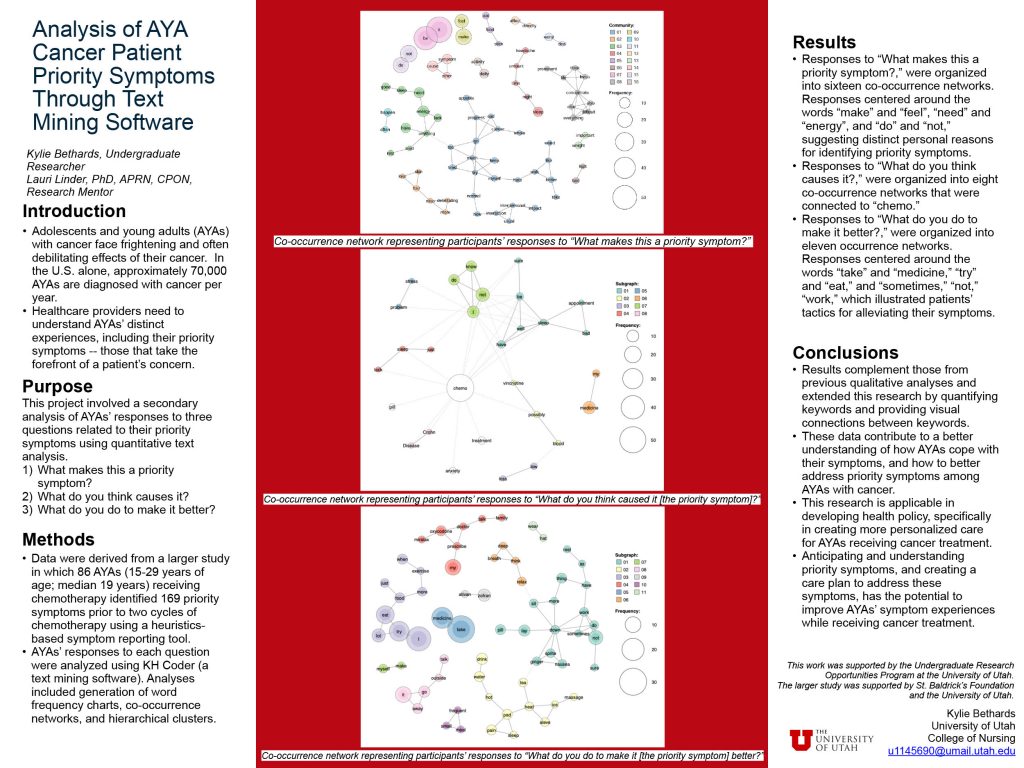