Artist’s Statement: For my thesis, I chose the idea that the “normal characters” in Mary Shelley’s Frankenstein, particularly Victor and the members of the village, created the monster that Frankenstein’s creature becomes as seen through epiphanies the creature has. Within the project, there are four quotes from the book: one from Victor Frankenstein and three from the creature he created. In the first quote by the victor, he talks about his disappointment in how his highly anticipated experiment has turned out and how he flees from it the second it begins to move. Under it is a blank face to show that at this time, the creature is new to this world and impressionable. This circumstance makes Victor’s implication that it is a “wretched” disappointment far more impactful since this is some of the only information it has at the moment. The next three quotes are from the creature’s perspective under three different names: creature, monster, Adam. In the creature section, the creature speaks about how lonely and miserable it is to exist as himself. This loneliness would try to be remedied as he tries to connect to others: William, the village family, and the little girl he saves. However, those endeavors fail, and he is only seen as a threat and a monster. The creature then realizes he will never be accepted and decides to give in to his rage; becoming a monster. The image under that quote is a monster fully realized while the picture before was a shadowy figure still being formed. In the final quote, the creature is arguably at its most vulnerable speaking about how it has nothing to live for mentioning its lack of purpose and fellow creatures, which he nearly had before Victor betrayed him and destroyed any potential for a family he had, which is represented in the image of a woman and child inside his silhouette. This is where the creature is most human so I chose his first intended name: Adam, a reference to the first human being.

Citations are in the top left corner of the project

View my art below!
Questions or comments? Contact me at: nandiluvai@gmail.com 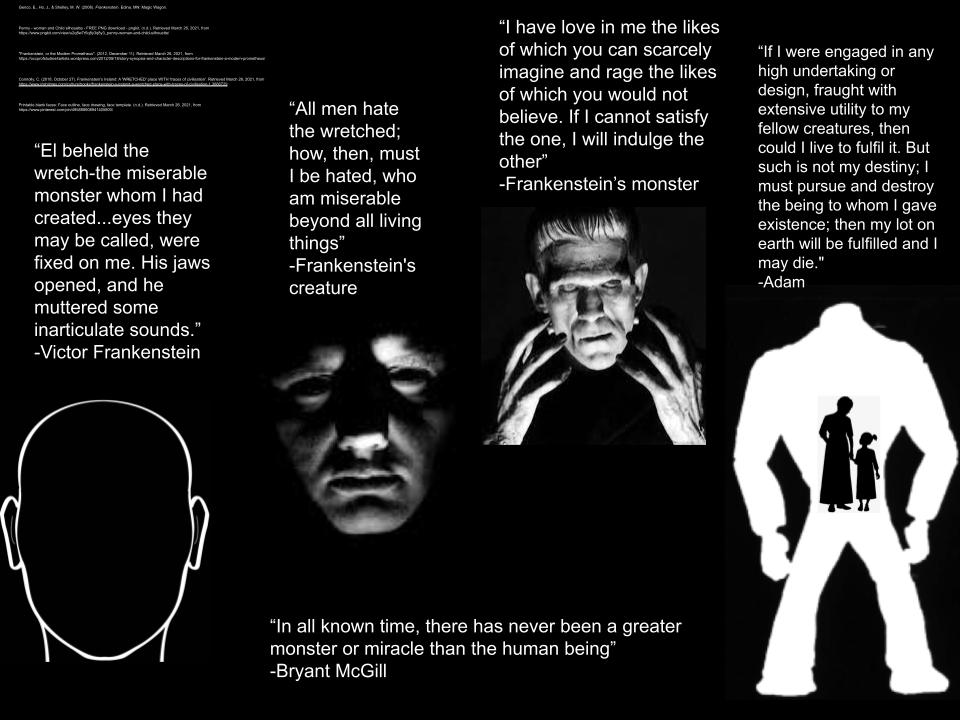