Artist’s Statement: As in many countries, Britain has regulated its immigration policies in favor of the British people. However, this has evolved in the last decades to become one-sided oppression towards immigrant families who seek a safe space for their families to grow. The detrimental treatment towards these minorities revolved on the idea that these people were stealing jobs from British workers; and disregarded any benefits that these foreign workers brought to the country. The situation became so dire that immigrant workers experienced othering and were categorized as a different class of workforce, consequently leading to a lack of rights and exploitation. As an organization against this behavior, the European Union acted as a lifeline for immigrant workers, especially for those coming from other European countries. Yet, British media attacked the European Union’s position in the years before the Brexit referendum, resulting in Britain leaving the European Union.

The presented visual art criticizes the oppression towards immigrant workers and the unjustified use of media to attack relations between Britain and the EU. The stick figures climbing the rope represent the immigrant workers attempting to cross into British territory. The bent flag acts as a bridge for these people but is at risk of collapsing due to the media pulling it down. The only support preventing the flag from collapsing is the EU pulling from a rope at the upper-right hand corner. After crossing to the other side, however, immigrants are presented with a harsh reality where a peaceful life, symbolized by the tree, isn’t reachable. Instead, they go through a tunnel into a different workplace where human rights seem questionable. A critical highlight is that while the EU prevents the media from collapsing the flag, it is also at risk of being taken down.

View my art below!
Questions or comments? Contact me at: u1185800@utah.edu 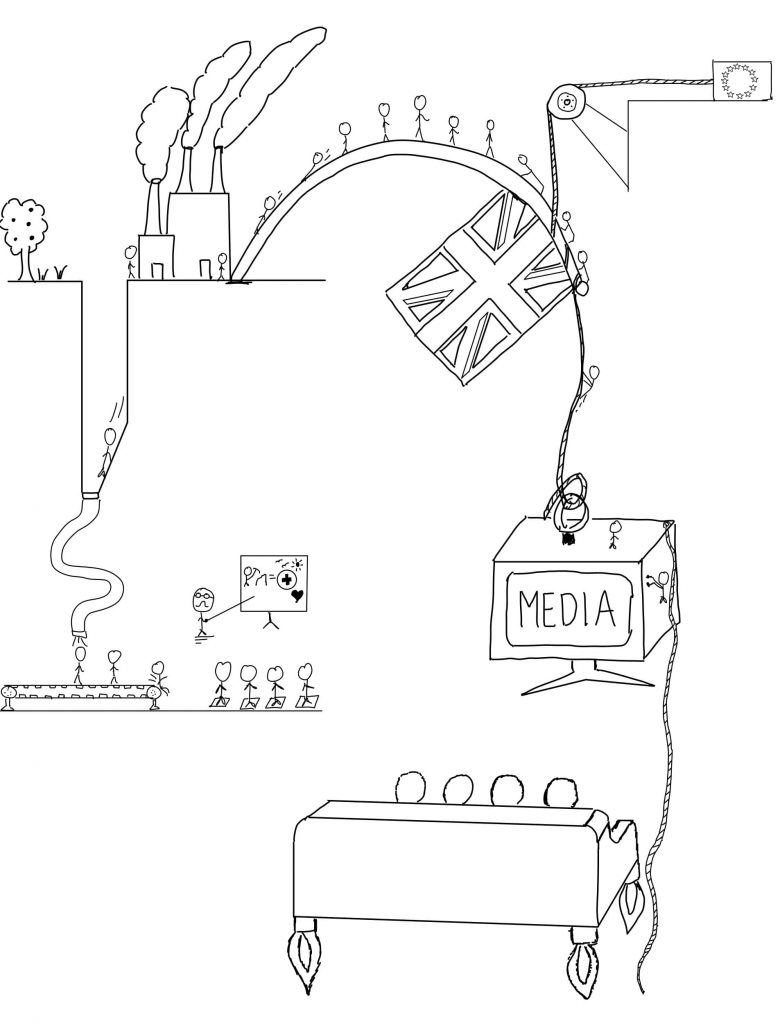