Artist’s Statement: The topic that I chose for my Art Symposium project is Non-Suicidal Self-Injury (NSSI). It is also known as Deliberate Self-Harm (DSH). Self-harm is the act of cutting, burning, or overdosing, among other things in order to punish, or just to hurt oneself. Men and Women self-harm in comparative and contrastive ways.
Before I get started on introducing the research I have done on this topic I would just like to mention why I chose NSSI and DSH. I have two friends who have recovered from self-harming. Self-harm is a topic that is very difficult for people to talk about especially in American societies. The stigma surrounding suicide and self-harm makes those who have self-harmed feel hopeless, shame and alone because of their struggle with self-harm. I hope that my art piece and research can give some insight into why this is topic should be brought to light in order to help those who are struggling.
Women are slightly more likely to self-harm than men.
Data from a hospital in Ireland reports that out of 65,690 incidents of self-harm 35,093 were done by women and 30,597 were done by men (Cully, 2019). The bodily area in which men and women choose to harm also differs. The most common place to self-harm among both men and women is the arms (Victor, 2018).
The most common method of self-harm is cutting, regardless of sex (Victor, 2018). But women are also more likely to cut, scratch or hit themselves while men are more likely to burn, embed, gouge or break limbs (Victor, 2018). Women are also much more likely to intentionally overdose that men. 63% of reported self-harm incidences by women were intentional drug overdoses according to the same hospital in Ireland that was mentioned previously (Cully, 2019).
Overall, men and women are largely comparative in their location, method, and rate of repetition of self-harm. I hope that this data has made starting a conversation about self-harm easier. Please encourage people you know who are suffering from self-harm.

View my art below!
Questions or comments? Contact me at: bayleebruce@yahoo.com 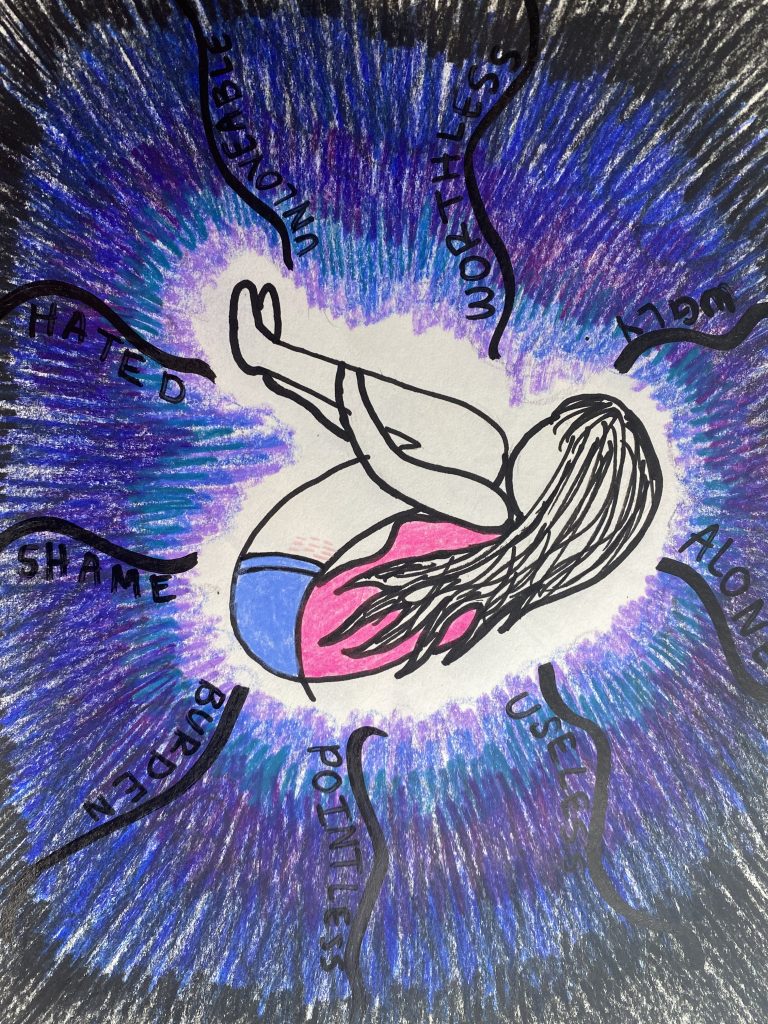